Only one hour outside of Prague, capital of Czech Republic, lies TEREZIN, a sleepy little country town which hides many secrets. Secrets which include a terrible past of the Second World War. Secrets which reveal true face of Nazi work camps. Secrets which are hard to believe.

Terezin, a former Gestapo prison, a Jewish ghetto and then a deportation camp, consists of the Small and Big fortress. The Small Fortress was built in 1780s and was named by Emperor Josehp II after Maria Theresa. It was originally intended to be a fortress to protect the Prussions, however, no battles were fought there. Instead, the Small Fortress became a Nazi work camp during the Second World War where mostly communists and homosexuals were sent. The prisoners had to work hard and then were sent further to extermination camps in the East. During five years of existence of Small Fortress as a Gestapo prison, between years 1940 and 1945, more than 30,000 prisoners passed through its gates.

Before I entered the main gate of the Small Fortress, I found the Nazi slogan written in capital, black lettering “Arbeit macht frei”, which means “Works makes you free”. Walking through courtyards and cells of prisoners made me feel the presence of the tortured, terribly treated victims of the Nazi regime which were cramped in overcrowded cells with poor hygienic conditions. I can´t describe by words how I felt when I passed through the “tunnel of death” which was meant to be the last tunnel the prisoners passed through before they were executed to death. Or how I felt when I saw the wall where some of the prisoners were shot and killed. Or when I saw paintings made by children capturing the terror of this place… Grief, misery, repentance, sympathy, anger, disgust… I felt little bit of everything.

The Big Fortress, located on the river´s east side, was used as the Jewish ghetto, were mostly Czech Jewish prisoners were sent. Before the Nazis took the control over this small town, more than 7,000 local inhabitants had to be moved out so around 60,000 Jewish could come in. Can you imagine such number of people to live in a place where only 1/8 of such population used to live there?? Lack of space, privacy, food, horrible hygienic conditions … Jewish prisoners at the Jewish ghetto in Terezin were separated into males and females, children and old people. All of them lived separately in different parts of the town, placed into small or big cells. Between 100 and 400 people could fit into one “big” cell. Triple bunk beds therefore occupied 6 to 9 people and people were squeezed next to each other as much as possible. 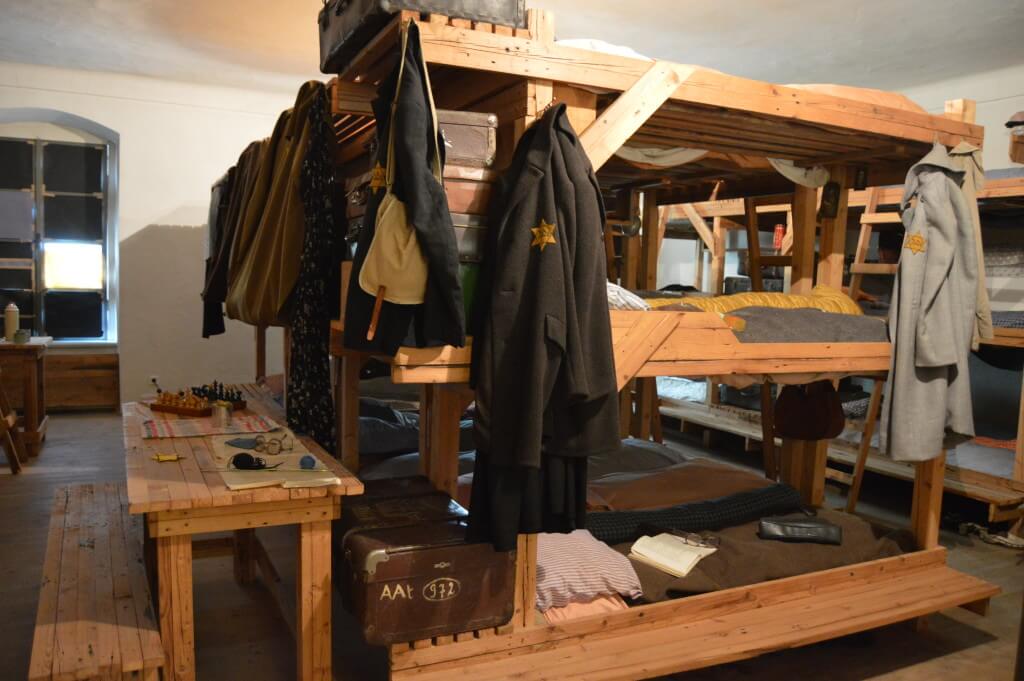 Although Terezin did not serve as an extermination camp and did not have any gas chambers, more than 30, 000 people died in Terezin ghetto because of inadequate, insufficient and horrible living conditions, quickly spread diseases and starvation. Because there was not enough space for graves, crematorium was built in order to get rid of the dead bodies more easily and quickly. People at crematorium worked 20 hours a day, 7 days a week. Next to the crematorium there is a large graveyard full of graves of Czech Jewish who died in Terezin during the Second World War.

By any means, both fortresses served as deportation camps which sent trains full of prisoners directly to Auschwitz and other exterminations camps in the East. Between 1941 and 1945 more than 140 000 people lived in the camp-ghetto, of the around 88 000 were deported to the East and only around 3,500 survived the war.

The most surprising thing for me about Terezin is the fact that Terezin camp was propagated as a peaceful place where Jewish Czechs were able to live happily side by side and govern their “own” town. Nobody of them expected Terezin to be their last stop before death camps. People were coming to this place with expectations for better life, better future and instead they got to cruel work camps, ghetto prisons, place of tortures and humiliation.

At the end, I would like to say that all of us, younger or older generations should be aware of what happened during the wars. We all should be aware of that terrible past and stories of terror and inhumanity which happened on our ancestors. Not only to look intelligent and well educated in the area of history, but more importantly to appreciate where we are now and how we are treated nowadays. We should appreciate all tiny details of the day and stop complaining about the things which actually do not carry any serious importance. We should be grateful for our lives!

PS: If you are looking for nice hotels and accommodation in TEREZIN, click HERE and find your best option. 🙂