Have you ever heard about Caribbean island Mucura? No? So continue reading…

7th of June, 2015 at 4am – getting up after three hours of sleeping… Why so early?! Because this is the day when I go to my very first CARIBBEAN ISLAND in my life!!!

The first challenging part of the day (getting up that early) was handled without problems. At 5am I took the bus from northern Colombian city Monteria where I did my internship as English teacher and headed to town Tolú (2,5 hours by Socrator bus company – one way ticket costs 20,000 COP = 6 euro, can be also reached from more famous Cartagena). After arriving to Tolú bus station we were offered a ride by “BICITAXI” to port “Muelle de Delfínes” where we were bargaining the round boat trip to island MÚCURA with different tour agencies, till we bargained pretty good price per person – 50,000 COP = 15 euro for both ways with agency TOLUMAR. You´ve got to bargain a lot in order not to get robbed by greedy local travel agencies.

After small breakfast and taking first group pictures, we boarded our Tolumar boat and were heading to three different Caribbean islands of “Archipiélago de San Bernardo” – the first one called Boquerón, the second one called Isla Palma, and the third one called Santa Cruz del Islote which is famous for being the most densely populated island on the planet, where more than 1,200 people inhabit just over one-tenth of a square kilometre. Can you imagine living there?? Kind of challenge, right?

Our last stop was on island MÚCURA which is a small island without any traffic, roads and most part of the island even without electricity. With my group of friends we decided we wanted to experience some adventures, therefore, we didn’t make any hotel reservation (well, there are not that many actually), we just brought a camping tent and hammock… We asked our captain to drop us off at the part of the island where camping was possible. Although he did it, after few minutes we bumped into the owner of the Club Múcura hotel who told us that it was ILLEGAL to do camping on the island and that we needed to request PERMISSION for this as the island is part of the protected National Natural Park Corales del Rosario and San Bernardo. Although he was offering us a quite good price for overnight at his hotel, we decided to take a risk and do camping, although at different part of the island – out of owner´s sight 🙂

After surviving very first mosquito attack in the local jungle fauna, we found a small island village called “Caracola” which can be translated as “conch” – and conches could be found everywhere in this small fisherman´s village. We met woman called Lina and her mother who made us sure we could do the camping without any problems close to their house so they could watch over our tent and personal belongings throughout a day for a small fee of 15,000 COP. After this great piece of news we set up the tent and hammock and set off to the beach on the other part of the island.

After couples of hours spending on this amazing beach and talking to our new Spanish friends, we decided to explore other parts of the island, therefore, we headed to another even more beautiful beach, again untouched by tourists at this hour.  We were lucky to watch breathtaking sunset from another part of the island which was recommend by Lina. On our way there we crossed the whole Caracola village and had chance to see how simply the villagers live their lives —- almost no electricity, no proper showers or toilets, no cell phone signal or internet —– simple but beautiful at the same time…. After watching one of the most beautiful sunsets I have ever seen in my life, we headed back “home” to our camping place where Lina´s mom prepared dinner for us for only 10,000 COP = 3 euro. Dinner preparation was not in the best hygienic conditions but who would say no to typical Caribbean meal – fresh fish caught by village fisherman on the same day, coconut rice and patacón (made from something that actually looks like banana). 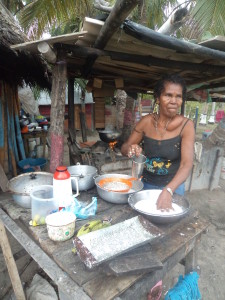 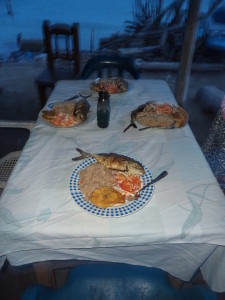 Before going to the beach located on opposite part of the island where we were supposed to meet our new Spanish friends at night, we were advised to “hire” a person from village who would be willing to sleep in our hammock in order to watch our stuff during the night time. Robbery by local villagers or locals from different islands was very probable according to Lina so we accepted her recommendations and bargained the price of 5,000 COP = 1,5 euro with one of villagers in order to watch over our stuff. The rest of the night I spent in company of great people, drinking typical Colombian rum “Medellín”, playing games, watching stars, swimming naked in crystal clear Caribbean sea … Like a dream, right? The whole night ended up in huge storm with lightening & thunders so this added some more adventure to our trip. 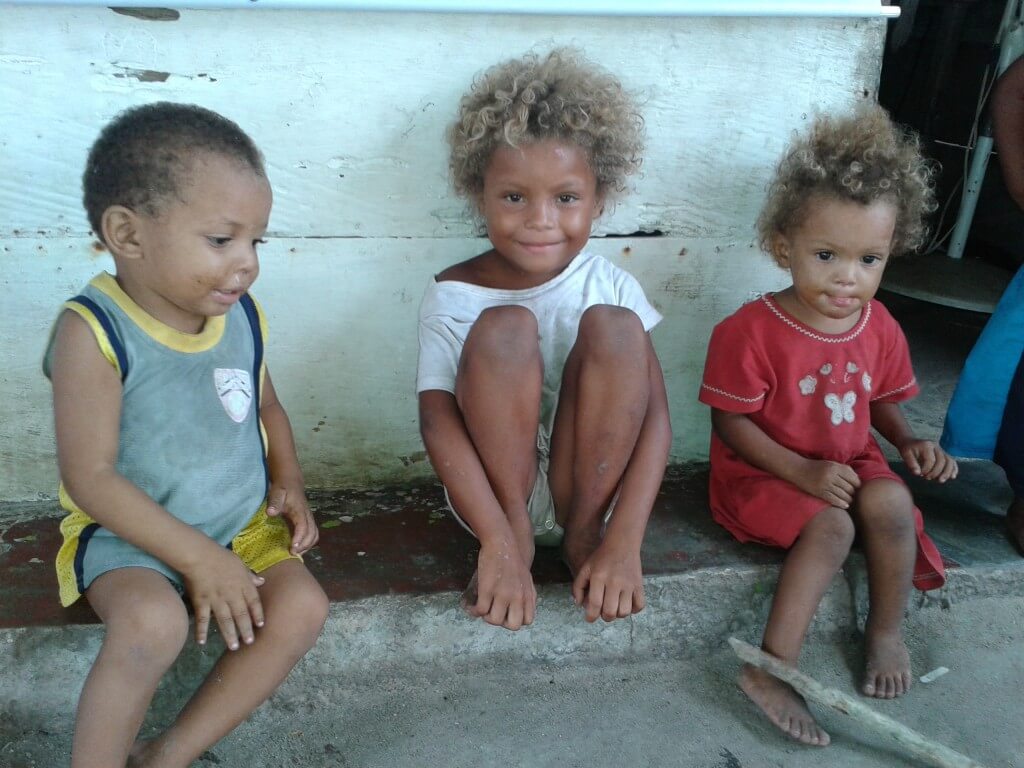 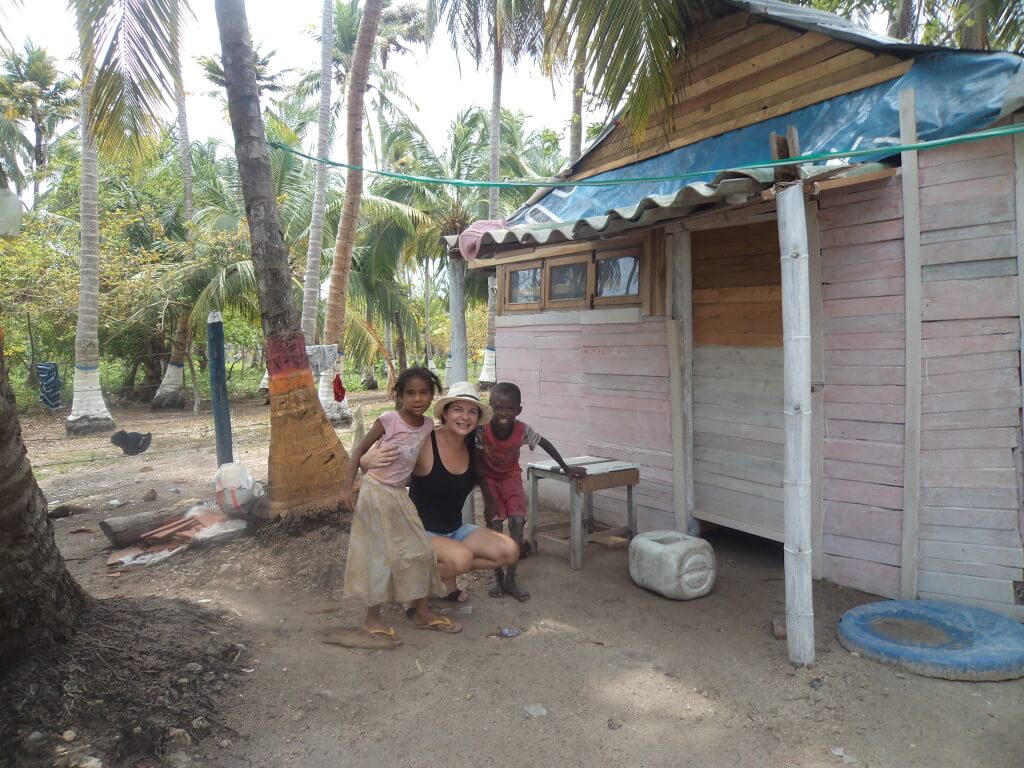 Next morning was a bit tough, not only because of our not very comfortable sleeping and storm, but also because of my gastric problems which required very frequent visit of bathroom. And honestly, can you imagine how such toilet on isolated island without electricity looks like? Let me describe it a little so you have some idea – three wooden boards joined somehow together, no roof, instead of door only piece of holey cloth, toilet without toilet bowl and of course no automatic flushing. For that I had to bring sea water in buckets and do it manually. Well, sounds funny, right? 🙂 Lack of privacy, lack of comfort, no high hygienic conditions – this belongs to adventurous backpacking, too. However as an exchange, I got to experience my very first Caribbean island from completely different perspective, surrounded by local people and cute local kids, learned how some people lead simple but happy life without necessity of possessing big fortune. 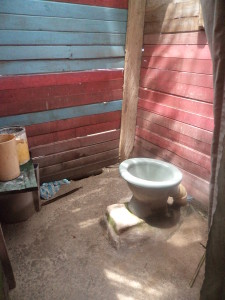 Wanna go and try something similar? Just go and do it!Take courage and try what you haven´t tried before, do what you haven´t done before and explore unexplored. Because this is the beauty of spontaneous, mysterious travelling! 🙂